About two or three weeks ago, the scheduled water supply interruption in our city was all over the news. Unfortunately, they had it scheduled during the Holy Week for about three days. At the rate the weather in Manila is going (31–34°C), this year’s Holy Week will not be any different from the previous ones. If I’d choose between no water supply and no electricity, I would pick the latter without batting my lashes any time of the day. Just the thought of not being able to shower at least once [within the day] makes me cringe. It could well pass for a crime in my books!

Anyway, upon learning about this impending inconvenience, my parents thought we might as well stay somewhere else during this time. We never travelled for leisure during the season of Lent. This year, we’re making a slight exception: we’re checking in at a nearby hotel for a short staycation. Fortunately, my folks copped a membership at a hotel not far off from home a few months ago. It includes complimentary accommodation as well as free pool and gym passes. Needless to say, the hotel’s going to be our home for the next three days. 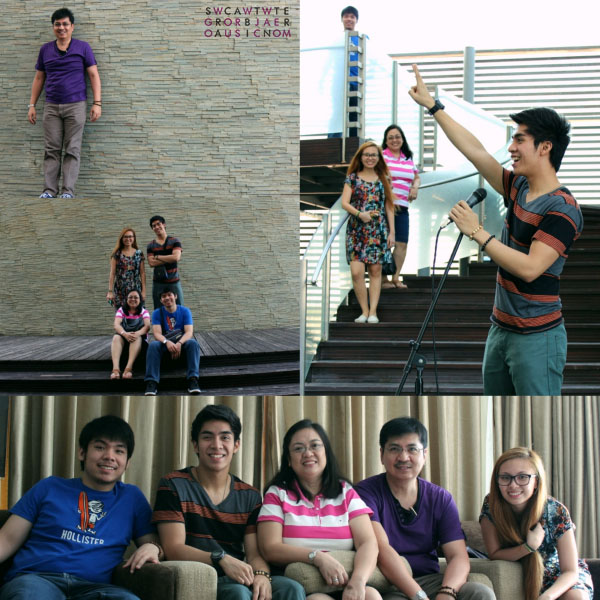 We were surprised to see a lobby full of people when we arrived at the hotel on Thursday afternoon. It seemed like everyone else had the same thing in mind! In fact, we chanced upon some fortuitous (not to mention, unpleasant) people along the way, and it was really an entertaining bout. Upon checking in, we walked across the hotel to grab some quesadillas and burritos for late lunch; however, such gastronomic delight seemed to have made us feel guilty, so we served our act of penitence at the gym two hours later. Since it’s a holiday, not many restaurants were operational. We ended up having dinner at McDonald’s which was just right across the hotel.

It was almost ten o’clock when we went back to our room, but thought the night was still young. Good thing Dad brought our ever-reliable board game; we had our little Scrabble tournament just like the good ol’ days. The goal has always been the same: beat Dad in Scrabble! He is good in hooking a word by adding one letter to a previously played word, and playing perpendicular, earning him a double-digit score in just one turn. I can’t even tell you how ecstatic we get when we win against him; that’s how good he is at this game!

We played three [hilarious] rounds until we all called it a night at half past one in the morning. Mom had fallen fast asleep, and it was difficult to suppress our laughter in between turns, cautious not to wake her up. It was certainly not as eventful, but neither was it entirely typical. Family time is always a good time after all.

It’s only been a week since our last road trip,

Endured 110° weather for another #4thofJulyWeeken

Happy Father’s Day, Dad (and to all fathers out

You can find out more about which cookies we are using or switch them off in settings.

This website uses cookies so that we can provide you with the best user experience possible. Cookie information is stored in your browser and performs functions such as recognising you when you return to our website and helping our team to understand which sections of the website you find most interesting and useful.

Strictly Necessary Cookie should be enabled at all times so that we can save your preferences for cookie settings.

If you disable this cookie, we will not be able to save your preferences. This means that every time you visit this website you will need to enable or disable cookies again.